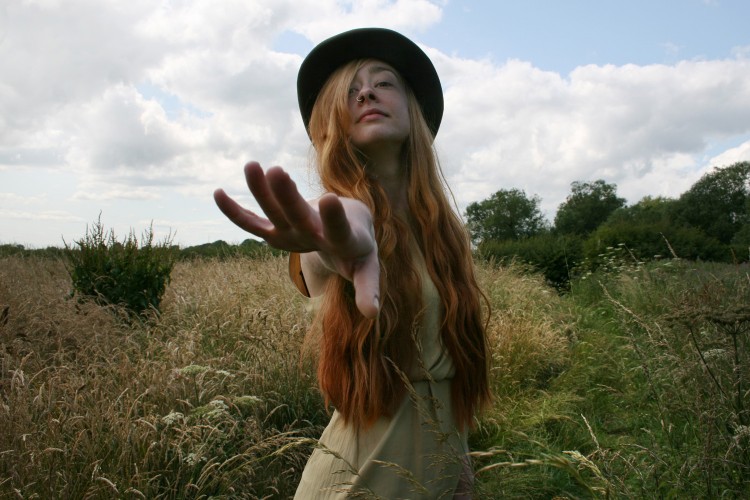 The Dyr Sister (Dyr is Old Norse for Deer)

Hailing from Hull in England, Sally Currie is otherwise known as The Dyr Sister. As a multi-instrumentalist she conjures up surreal tales with the aid of a viola, a mandolin, her voice and an array of found sounds. Sally performs her catalogue of haunting and ethereal modern day folk songs as a one-woman band, painting a fascinating canvas of sound as she goes. Her original and innovative pieces are influenced by a wide range of genres from jungle and dubstep through trip hop and hip hop and ending somewhere deep amongst the many varieties of traditional folk music from around the world.

She released her debut album “Fairy Tales for the Modern Gentleman – Volume One” in June 2015 and is currently composing Volume Two. She then went out to captivate audiences this summer at festivals and concerts across the UK with her unique and unconventional tunes.
She is a regular performer on Hulls music scene and has graced the stage at festivals such as Filey Folk, Beverley Folk Festival, Hidden Hill and The Sesh. She was also a performer for Folk in Box at Freedom Festival in Hull. In the past year she been captivating audiences further afield at The Underworld and Jazz Cafe in Camden Town, Colchester Arts Centre, Manchester Club Academy, Sheffield, Ipswich and Stowmarket and spent several months in 2013 playing with a travelling band in the South of Mexico.

She’s supported acts such as This is the Kit, Banned From Utopia, RM Hubbert, Holy Moly and the Crackers, Lach, Hamell on Trial, Snowapple, Thomas Truax, The Cesarians, Hillbilly Moon Explosion, The Dead Rat Orchestra and Poets of the Fall.

END_OF_DOCUMENT_TOKEN_TO_BE_REPLACED
« Dylan Cartlidge
Eastwood »
Home
Back
All details are correct at time of publication but may be subject to change without notice. This website contains copyrighted material which we have acknowledged where possible. If you are the owner of copyrighted material and do not agree with its use please contact us.
See our Terms and Conditions and Privacy Policy.
Copyright © 2020 Sesh Events
Web Design: The Missing Dimension