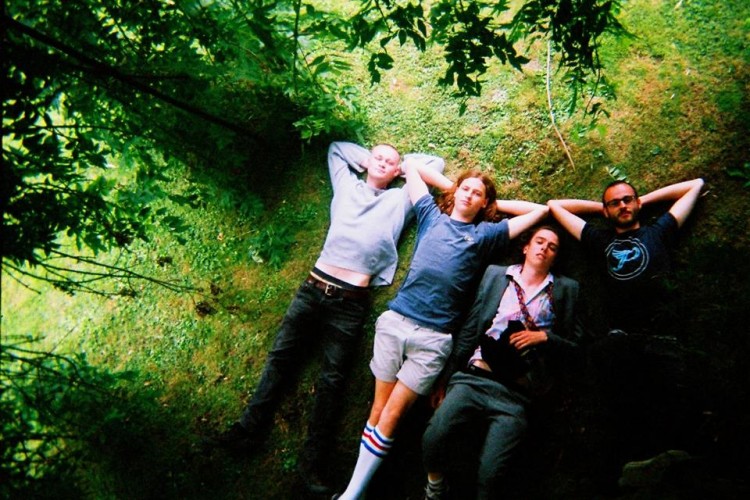 There’s a pleasing irony to the fact that the oldest song from York quartet Bull’s debut ‘Discover Effortless Living’, is a jangling, harmony-drenched offering entitled ‘Green’. Dating back to 2012, shortly after the group of then-young teenagers first formed, it introduces a band that – though still only in their mid-twenties – are actually far from wide-eyed apprentices on the scene (the green newcomers you might expect); instead, vocalist and chief songwriter Tom Beer, guitarist and fellow original member Dan Lucas, bassist Kai West and drummer Tom Gabbatiss have notched up more than 500 gigs to their name, honing their wares over nearly a decade of graft and emerging with a record that stands as testament to that long-term, tight-knit bond.

Initially coming together at the end of 2011 when Tom B first met Dan (the former had started dating the latter’s sister, a first incarnation of the band gave way to their current line up in 2017 when Kai and Tom G joined the fold. Having spent their formative years sharing music and developing a mutual love of Pavement, Pixies, Yuck, Dinosaur Jr and the “guitar-heavy, artistic rock music” that had come from the more lyrically-minded end of the ‘90s American indie spectrum, there’s an audible ease to the way the four work together that comes from having devoted – for some of them – almost half their lives to doing it., Bull have also sharpened a knack for the nuances of the genre too: cleverly needling melodies that’ll stay in your mind for days, and pretty harmonies that sweeten every riff.

It’s an attitude that writes itself all over the 13 songs of their debut. Recorded across a long, two-year bout of repeated trips to Amsterdam with producer Remko Shouten at the helm (“He’s Pavement’s sound engineer. We met him in a bar at 3am when he was on tour with Spiral Stairs”), ‘Discover Effortless Living’ doubles down on these ideas, fusing the easy atmosphere of four friends with a near-symbiotic musical relationship and the intricacies of a group unafraid to push their potential to create an album that reveals more of itself with each listen. Having honed their live chops playing with the likes of Squid, The Orielles and Spiral Stairs (Scott Kannberg of Pavement) they’ve become a music force to be reckoned with.

“The idiosyncratic four-piece invoke the spirit of indie-rock royalty while retaining a wild, undepredictable energy all of their own.” Andy Brown, Soundlab (On Brudenell Social Club gig played 21/01/19)

“Bull radiate warmth wherever they play, like a big sonic hug. The personification of nonchalant, the occasional failing of a guitar amp is taken in stride. A band who make every performance feel like they’re playing in your living room.” – Pretend Online (on Humber Street Sesh, August 2019)

“Guitar pop, but not as we know it. […] Strange and unexpected things happen in Bull’s songs. And that makes it a very nice and exciting band. […] This group also excels in a cheerful appearance on stage; you almost believe that it is only fun to play in a band.” Wim du Mortier, Chaos Magazine (On Rotterdam show with Squid played 17/09/2019)

END_OF_DOCUMENT_TOKEN_TO_BE_REPLACED
« Bud Sugar
Bunkerpop »
Home
Back
All details are correct at time of publication but may be subject to change without notice. This website contains copyrighted material which we have acknowledged where possible. If you are the owner of copyrighted material and do not agree with its use please contact us.
See our Terms and Conditions and Privacy Policy.
Copyright © 2022 Sesh Events
Web Design: The Missing Dimension