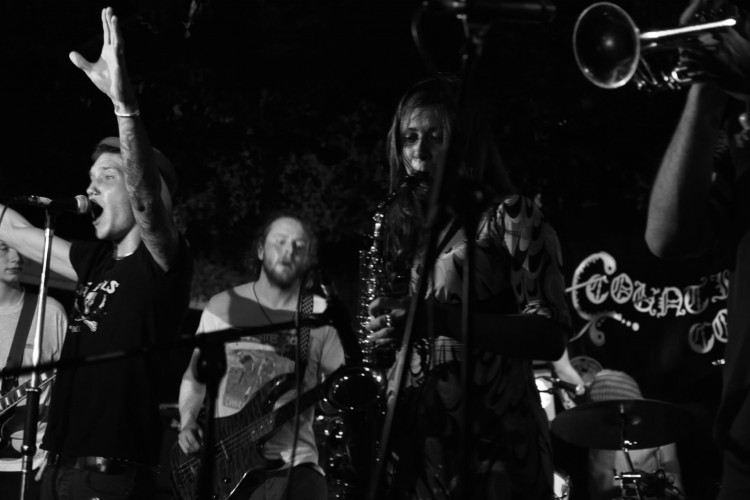 Get ready to skank, pogo, mosh, jig, polka and maybe even waltz – like a hyperactive kid on Kia-Ora, the Counting Coins sound refuses to stay still, switching from Ska Punk to Gypsy to Hip Hop and back again several times in the same song.

The one constant is energy – which you will need by the truckload to keep up with these boys. Since forming in 2009, they have steadily built a reputation for stealing the limelight sharing stages with Random Hand, Sonic Boom Six, Melt Banana and Reverend & The Makers among many others. Whether it’s an opening support slot or a headline gig one thing is guaranteed, Counting Coins want everyone to get involved and they won’t take no for an answer.

No enemies, no strangers…

Counting Coins released their second E.P “Reach For The Sky” on the 6th December 2013. They released two singles from the E.P “Blue on Blue” and “Misdirected Anger” both of which feature trombonist and frontman from popular ska-core band “Random Hand”. The coins have played over a wide range of festivals across the country in the past two years including: Boomtown Fair (Winchester), Rebellion festival (Blackpool), Galtres festival (York), Folkestone ska festival (Folkestone), Tramlines festival (Sheffield), Doncaster live (Doncaster), Freedom festival (Hull) and the Humber street sesh festival (Hull)

“We really cannot emphasise just how great Counting Coins are. This band are without question our favourites of the entire weekend. They bring the party and the folk and reggae-influenced noise in the most delightful way imaginable (a little bit like a Yorkshire Gogol Bordello – from pirate dancing (and getting the audience to dance as pirates). An absolutely fantastic show. We can’t wait to see this lot perform again” – Anastasia Smith (Soundspheremag.com)

“Last but not least the crowd were fired up by Counting Coins, who took fans on a trip to Mexico as they energised the crowd during an explosive set of ska. With saxophone and trumpet sounds and mind-blowing rap skills from frontman Harry Burnby, it seems there is nothing this band can’t do” – Hull Daily Mail.
“Filling your ears with adrenaline, Reach For The Sky provides an invigorating dose of uplifting energy. Sticking in your mind like blu-tack, these bouncy songs are irresistible. The bipolarity between the bubbly music and sober, almost protesting, lyrics gives the EP a carefree vibe, yet entices listeners into the songs before encouraging them to consider the deeper message rooted in the lyrics” – Ciara Hanstock (thehullfire.com)

END_OF_DOCUMENT_TOKEN_TO_BE_REPLACED
« Cotton Gussets
Craig Dearing »
Home
Back
All details are correct at time of publication but may be subject to change without notice. This website contains copyrighted material which we have acknowledged where possible. If you are the owner of copyrighted material and do not agree with its use please contact us.
See our Terms and Conditions and Privacy Policy.
Copyright © 2022 Sesh Events
Web Design: The Missing Dimension