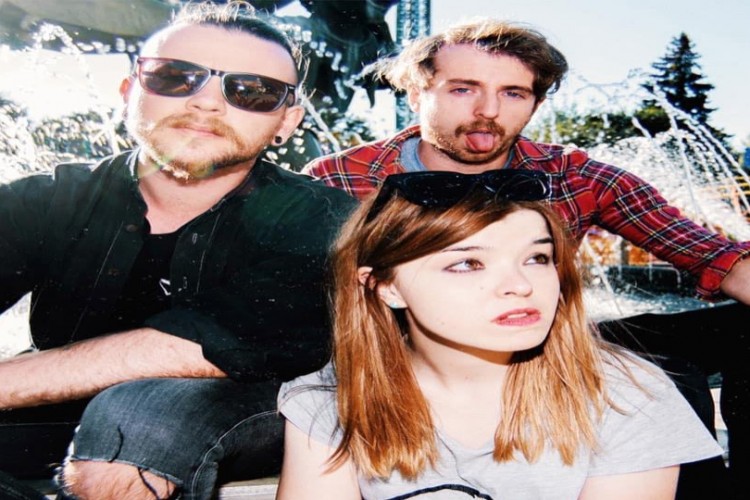 FALSE ADVERTISING are a three-piece noise-pop trio who specialise in drenching the catchiest of hooks in the fizziest of guitar-fuzz.

Impressing everyone from Steve Lamacq, Total Guitar, The Guardian, DIY and Drowned in Sound along the way. 2016 saw the band stun Liverpool Sound City, Kendal Calling, Dot to Dot Festival and Off The Record (where they were surprise headliners), as well as rack up killer support slots with Bob Mould (Husker Du), The Garden, Estrons, The Amazons and Pins.

In the grand scheme of young bands to care about, Manchester-based alternative trio, False Advertising, present a tantalising prospect. With three years together spent bubbling under the surface of the UK music scene commanding kudos for their chaotic live shows and self-made releases, their niche is now carved, and the stage set for something bigger.

Rounding off last year with a full page feature in NME which praised their brand of slacker-rock as “delightful”, 2018 has seen the band hailed as a certified “band’s band”, with Robert Smith (The Cure) personally inviting them to play his own Meltdown festival, Steve Lamacq praising their ferocity upon catching their SXSW set, Everything Everything endorsing them as “their favourite new band” live on BBC Radio 1 and guitarist Jen Hingley being voted 8th ‘Best New Guitarist In The World’ by Total Guitar.

The band were recently awarded PRS Momentum Funding for the release of their forthcoming album, which has been recorded at London’s The Church Studios and is set for release in 2019. New single You Said is the first taste of this forthcoming chapter, further fuelling the growing buzz surrounding the band, racking up 60,000 plays on Spotify in the two weeks following it’s release.

Venting heightened emotions of united frustration, whilst deftly mixing grunge with alternative rock. Lyrically half-pop-culture-junkie, half-moronic-anti-anthem, the instrument-swapping trio’s songs are laced joyful catharsis and dissonance, a rotating line up of front-person and drummer fostering both inclusivity and unpredictability.

“A really, really tight, ferocious three piece, you should check them out.” – Everything Everything (live on Radio 1)

END_OF_DOCUMENT_TOKEN_TO_BE_REPLACED
« Falls
Far Caspian »
Home
Back
All details are correct at time of publication but may be subject to change without notice. This website contains copyrighted material which we have acknowledged where possible. If you are the owner of copyrighted material and do not agree with its use please contact us.
See our Terms and Conditions and Privacy Policy.
Copyright © 2022 Sesh Events
Web Design: The Missing Dimension