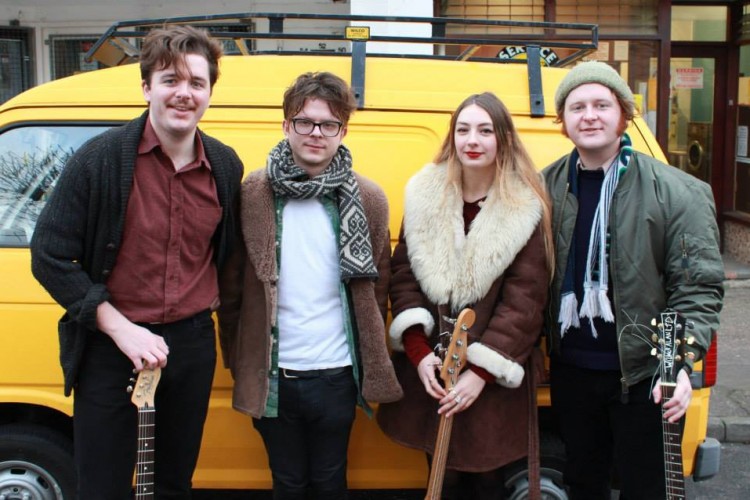 In the summer of 2014, two Bens (Ward and Brown) formed a secretive fraternal order called Ben Club, based in a secret location in Britain’s smallest town (Manningtree). Exactly what went on in Ben Club was never revealed, but when two men spend that amount of time together, inevitably their friends and family members start to question whether it is more than just a male bonding exercise.

Following an intervention by Ben Brown’s girlfriend and brother, Ben Club was forced to relax its strict membership rules. Krista and Alex joined the group to play bass and guitar and the new four-piece used this opportunity to choose a more inclusive name – SuperGlu was born.

Meanwhile, Huw Stephens picked up on the first Ben Club demo and played Diving Bell on his show in October 2014. This secured the group a coveted spot on the front page of the Manningtree and Harwich Standard – as the band who had been played on Radio One before they had played a gig.

“SuperGlu already perform with the prowess of a band with a decade’s worth of experience. If anyone’s talking about the resurgence of the ‘guitar band’, then SuperGlu are the very essence of it, a title they look to champion throughout the rest of 2015 and beyond.” – Drunken Werewolf

END_OF_DOCUMENT_TOKEN_TO_BE_REPLACED
« Stuka
The Supersonic Jets »
Home
Back
All details are correct at time of publication but may be subject to change without notice. This website contains copyrighted material which we have acknowledged where possible. If you are the owner of copyrighted material and do not agree with its use please contact us.
See our Terms and Conditions and Privacy Policy.
Copyright © 2022 Sesh Events
Web Design: The Missing Dimension