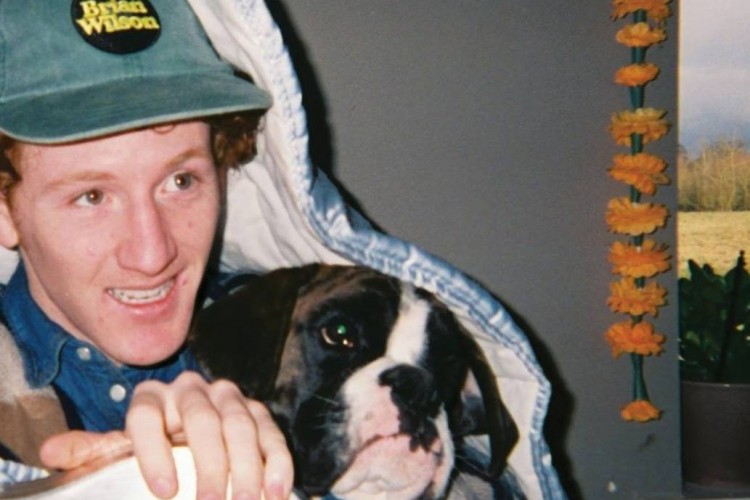 Willie J Healey has won over a fast growing audience with his natural charm and contagious sense of humour. His hazy surfer rock is filled with surprising quirks, nostalgic hints and a fresh take on songwriting.
After getting a guitar for Christmas at the age of ten Willie delved into the world of Oasis covers before gradually starting to write his own stuff. “Generally, I will start on acoustic guitar in my bedroom, and I’ll kind of get the core structure and the lyrics done,” he tells Clash.
With two EP’s under his belt and an album on the horizon, Willie definitely has seen a lyrical development. “The first two EPs are kind of about films. I used to watch sci-fi films, and I’d write quite funny songs about the characters in the films and stuff like that. For my album I’ve been writing about myself more. I try to make it a bit more personal.”
Approaching the milestone of a debut album, Willie J Healey seems very cool about it. His DIY attitude definitely set it marks on the album, which was recorded mostly in Healey’s garage and a Welsh cottage. “The aim wasn’t to be too lo-fi,” he ponders. “I think, when you say home recording people just assume it’s gonna be Mac DeMarco, and I love Mac DeMarco, but we were trying to make it sound as good as we could.”
Though his music comes from a contemporary context there is definitely a timeless aspect to Willie’s sound. Drawing on inspiration from 80’s movies and Bob Dylan, the nostalgic influences are clear. “I quite like that Bob Dylan style of having a story in one line, and then the next line could be something a little bit different”, he says, reflecting. “I’m big into lyrics, I listen to music and if the lyrics is not good I really can’t listen.”
His music also reflect an attitude appreciative of imperfections. “I’m a massive Neil Young fan. I love the way he just turns albums out,” he starts. “I like the idea that you just do as much as you can. Not worry too much about things being perfect.”
Though his relaxed vibe certainly shines through these is a balance to keep. “I love things that sounds really perfect, like ‘Dark Side Of The Moon’, but then I love albums like ‘Tonight’s The Night’ that are really messy. I guess it’s a combination.”
As a musician, Healey seems immensely enthusiastic about his craft. Already planning his second album, there is clearly no holding back. “Music for me is something I can’t imagine not doing. If I’m not playing then I’m talking about music. If I’m not talking about it then I’m watching videos of music. I’m pretty obsessed by everything about it. Even Iron Maiden tour documentaries.” Just to clarify: “I’m not an iron Maiden fan – let’s just clear that up, but I do like any kind of music documentaries.”
And for the future?
“I suppose I finish my first album, don’t really know how that will go. I I’m just gonna start the next one, I’ve got songs ready, so I’m just gonna keep at it and record again. Straight into the second one.”

END_OF_DOCUMENT_TOKEN_TO_BE_REPLACED
« White Orchid
Windum Earl »
Home
Back
All details are correct at time of publication but may be subject to change without notice. This website contains copyrighted material which we have acknowledged where possible. If you are the owner of copyrighted material and do not agree with its use please contact us.
See our Terms and Conditions and Privacy Policy.
Copyright © 2022 Sesh Events
Web Design: The Missing Dimension