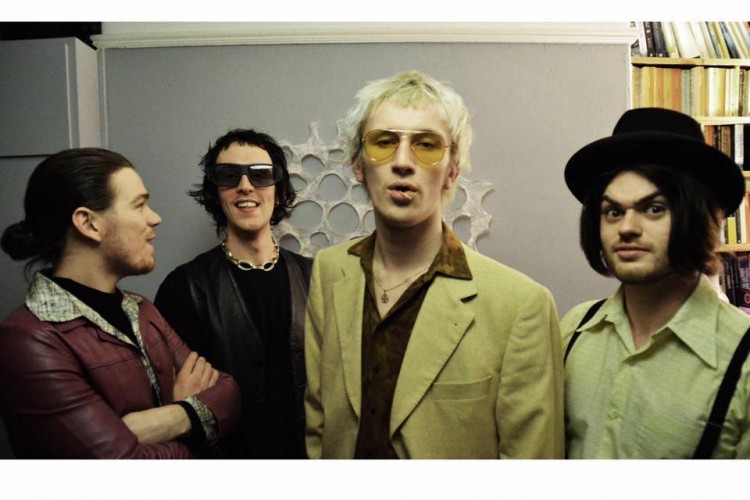 There’s a thing about Fling. Whether they are set to become massive, or just massively annoying, could be an evens bet at this stage. But this catchy and grower of a debut track from the Bradford four-piece, ‘Welcome To The City’, and the video to accompany it, offer something that draws you back, and not just in an earwormy kind of way.

Described as “combining the folktronica of The Beta Band, the psychedelic grooves of ‘Screamadelica’ era Primal Scream and the visceral turn of phrase of The Fat White Family” (which should be enough to either engage your interest or turn you completely off depending on your musical proclivities), Fling – who “write and record relentlessly” in the basement of drummer Luke Fielding’s home in Saltaire, Bradford – have unveiled ‘Welcome To The City’ as the first of a four-track EP, to be released this summer.

Lyrically about an alien coming to visit Bradford (of all places!), and based on a little green man 18-year-old vocalist Charles McSorley made out of a punch bag when he was seven, it combines a mish-mash of instruments against gang vocals and chants.

There’s some definite attitude and panache about young Charles, who, adept at art and design, also came up with all the band’s artwork which will feature on a t-shirt released with every song featured on the EP which will come out over the next months prior to its full release. Look out for the rather masterly, spontaneous cartwheel by livewire guitarist Jack Winn in the vid, too.

The four met whilst all in different bands at a gig Charles was performing at, ending the night in Luke’s studio writing their first song. In the weeks that followed the band – all members of their local anarchist club and all obsessed with Bowie and Bolan – ‘Fling’ eventually evolved from their ‘Fling or Die’ motto – the inspiration for their self-drawn artwork and the alias of their social networks.

So far, Fling are something of an unknown entity, with just a handful of local gigs around Bradford under their belt and this first track. Little Indie has, however, been privy to hearing the rest of the EP tracks, and it is those which gives us sufficient reason to say: keep this band on your radar.

Check out the upcoming Fling gigs below. We are told that guitarist/drummer Luke Fielding (also in charge of Fling production) rather interestingly plays a tom-tom and snare whilst standing, with the drums strapped up to loads of percussion. We are unsure whether Jack is given to any onstage cartwheels: why not go along to a gig and see for yourself?

END_OF_DOCUMENT_TOKEN_TO_BE_REPLACED
« Fire (The Unstoppable Force)
Follow Deep »
Home
Back
All details are correct at time of publication but may be subject to change without notice. This website contains copyrighted material which we have acknowledged where possible. If you are the owner of copyrighted material and do not agree with its use please contact us.
See our Terms and Conditions and Privacy Policy.
Copyright © 2022 Sesh Events
Web Design: The Missing Dimension