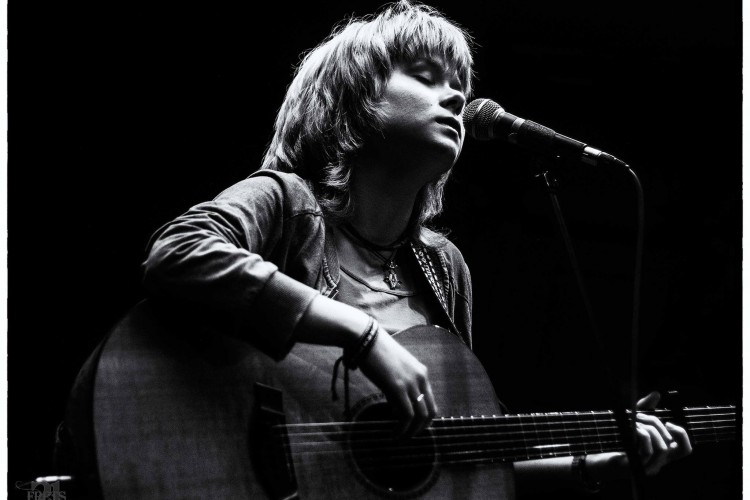 Katie picked up her Dad’s guitar in December 2012, to stop it from collecting any more dust. Since her first union with the guitar, she has developed her own style, based on her eclectic music taste – an ever changing and infinite list at that! Growing up in Yorkshire and going to many folk festivals has nurtured Katie’s love for folk music, and has recently inspired her to begin writing her own material.

Here is what Tim O’Connor said about her: “Every once in a while we are blessed with a singer who is quite simply born to write and perform exquisite songs with confident, gentle assurance. Katie’s eclectic musical tastes and influences have helped shape an original and refreshingly credible writer, whose stunning voice delivers assured, mature songs that quieten the room as you accompany their characters on evocative and poignant journeys. I whole heartedly urge you to listen to Katie Spencer so you too will know that the future of English songwriting is in very safe hands indeed. Chin chin.”

Here is what Stuart Murray, of Lucifers Gait said about her: “During a recent recording session Katie joined us one afternoon and during this time she performed a mini-set for us including one of our own tracks ‘Over the Top’. Katie’s singing and guitar style transformed it from an average number into the haunting love song I had intended it to be when I wrote it. Katie has a wonderfully unique singing style which contains soft angelic tones and a raw gruffness, that when combined can project any normal song to the next level. The future is definitely bright for this star of the future.”

END_OF_DOCUMENT_TOKEN_TO_BE_REPLACED
« Kashmere
Keg »
Home
Back
All details are correct at time of publication but may be subject to change without notice. This website contains copyrighted material which we have acknowledged where possible. If you are the owner of copyrighted material and do not agree with its use please contact us.
See our Terms and Conditions and Privacy Policy.
Copyright © 2020 Sesh Events
Web Design: The Missing Dimension