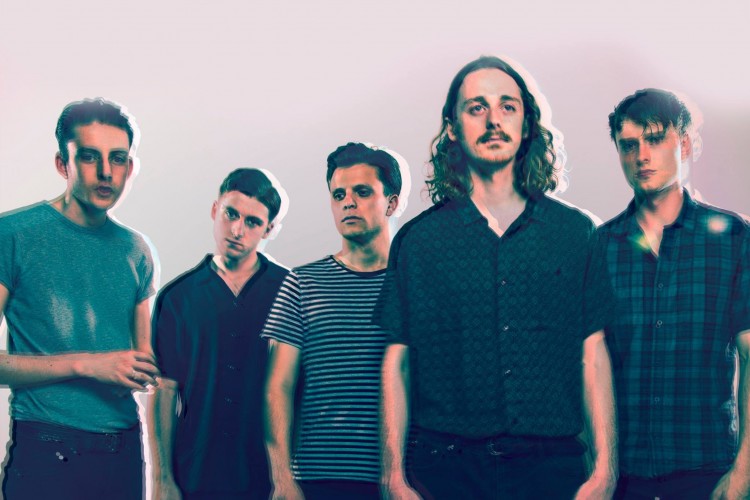 A tacky disco meets a Last-mile wake’…Fighting Caravans is an alternative-rock sextet from Leeds. Taking influences from early American Blues and more contemporary Rock music, the group delivers bold social commentaries akin to sounds of Fat White Family, Grinderman and QOTSA, with subtle Country, Jazz and Psychedelic overtones. The vintage guitars lend to an aching exposition of lyrical variety; from the final confessional moments of a felo-de-se to narcotic anthropomorphism, Fighting Caravans have a burden only alleviated via public execution…

In 2016 the success of singles Tyrannosaur and Blue Heart Motel, provided the opportunity for the band to complete their first ever UK & EU headline tours and feature at a number of festivals, including; Reading & Leeds Festival, Live At Leeds, Liverpool Sound City and Tramlines. The band have recently finished recording their 2nd EP at The Nave (Kaiser Chiefs, Eagulls, etc.), from which the first single will be released by Clue Records in January.

Press:
One’s To Watch 2017 – “it is with their storming live performances in which they truly shine, reaching an energy and intensity which few bands can match” – Gigslutz

“Their tracks rapidly switch from simmering, and moody, to explosive angst” – Counterfeit Magazine

“Intense and unpredictable, it’s been a while since we’ve seen a band like this” – Bang The Drum

END_OF_DOCUMENT_TOKEN_TO_BE_REPLACED
« Fifty Nine Violets
The Finest Hour »
Home
Back
All details are correct at time of publication but may be subject to change without notice. This website contains copyrighted material which we have acknowledged where possible. If you are the owner of copyrighted material and do not agree with its use please contact us.
See our Terms and Conditions and Privacy Policy.
Copyright © 2022 Sesh Events
Web Design: The Missing Dimension